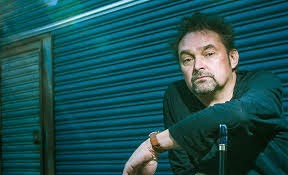 Three years ago I wrote a blog about Shandy Bass. Top Deck may have got a mention too. Anyway, in amongst the sackful of letters I got in response to this piece of nonsense was a reply from Martin Kitcher, a Dorset musician, who, it transpires, had written a song about Shandy Bass. I of course replied straight away and said  that I'd love to do a Q&A with him as he seems just the sort of maverick my readership would be interested in. Like I said, that was March 2011. Sorry for the delay Martin.

Your CV looks pretty busy - what do you best?

I think I`m probably best at remembering my way around rock and pop songs, which has not only helped me make the odd penny, but has helped quite a lot of musicians get through the odd gig where they weren't really that sure what was going on. I'm a good prompt! This ability helped me naturally into the production of new material for me and for others.When I was a kid, all of the tunes in my head were self invented, so I guess I learned about music that way too.

You appeared on my radar singing Shandy Bass! What's that all about?

The story of Shandy Bass formed as I was driving my old Renault 5 with my friend Marc Arnold to a gig in Southend. Years prior I'd worked in a factory with a company that had moved down to New Milton (my hometown) with many of their staff from that part of Essex; leaving me with many tales of unseen faces and place names of the town that was now fast approaching. Dying for a beer when we arrived, and all hostelries shut, we settled on Shandy Bass from a chip shop by the sea front. I top decked (sorry) the song later on with an ending that takes me and the listener, hopefully, to my hometown - hence the local references including 'cricket down at Ashley Rec.'

So you think you can write another Waterloo? Or Boom Bang a Bang? Why did you go all Eurovision?

It was a joke that got out of hand, but with so many people around me at the time enjoying it and wanting it do well I just had to roll with it. I did find something that I objected to within the rules of the competition, at about the time we found out that we didn't have a hope, and that clause caused all the publicity. But it all became too much for me to handle. My mate who was acting as my press agent at the time took a lot of the pressure off me, but, alas, whilst we were still toying with ideas - including representing Iceland instead of the UK - I had an accident and broke my back. Not too helpful on fronting my dancers (see below). So that was that really.

Will Dorset go the way of Scotland?

I can see it splitting into East Dorset and West Dorset. But the busiest areas of East Dorset will be English with emphasis on the blue bit of the Union Jack for a very long time to come. But Cornwall will go first.

Is Social Media a big part of your life? When did you last write a letter?

I have always written loads. The internet and its social media was like a prayer answered. I love being in touch with people and, yes, sometimes they do get an actual handwritten letter from me. But I've always had great difficulty holding a pen and modern day keyboards have made things so much easier for people like me - with very busy thought patterns and less physical extremities. I would hate being without social media but it does make me wonder what some people smell like!

Who or what makes you angry?

Any injustice dealt out by bullies against people with less defence. Particularly injustices against disabled people. Although it makes me me seethe, I dont like to impose my beliefs on anyone - a quick word or two in a song is something that I am lucky enough to do and get things out of my system.

That's a book in itself! But here's one: I was booked with the band to play at a kind of Christian festival weekend in the summer - as soon as they'd finished their studying and praying they came to see us play. I didn't know how the heck this would go, but when I saw them all flood in - with so much energy - I realised they were party people. We started with Sit Down by James and then followed seamlessly into Spirit In The Sky. The set then seemed to flow naturally. When we did I`m a Believer the lyrics gradually became hymnal in delivery: 'And then I saw HIS face, now I`m a believer!'

Would you share your bag of sweets with a stranger on a long train journey?

Did do as a kid once. Never again - the sooner I'm off of there the better. I wouldn't really want to share a beer in the buffet car either really these days.

You're in a bar. What do you ask for?

A pint mug with a handle filled with either a 5% very cold lager, a decent real ale or local cider that has seen many apples.

Finally, your iPod is on the blink. It will only store one 3 minute song. What do you put on it?
It`s going to have to be something that I have sought after and failed to hear or find for – well, forever basically. So this would be a track by a band that, I think, was called Aphrodite's Child. It was 1971 and I think it was called Bye-Bye My Friend Goodbye. It's in my head but I've never found it.

I think this is what you're looking for Martin. Demis Roussos, Vangelis and some other fella in what looks like a Bee Gees outtake.

Thanks very much John - good questions. Hope you're OK and this is fun for your readers!