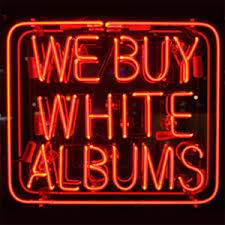 This post could just as easily have been called I'm Dreaming of a White Album or The Future is White. In the world of Venn Diagrams I'm not sure what the crossover between Beatles fans and right wing fanatics is, but if any of the latter have found this site by mistake I hope they move along - there's nothing to see here.

We all have a favourite album. That piece of plastic you pull out to get you through the bad times; as well as the good. An album, in all likelihood, you own more than one copy of - the original, the remastered limited edition anthology version including demos by the band when they were still in short trousers and even shorter on ideas. New York artist Rutherford Chang is, as you can see in this short film, rather partial to The White Album by The Beatles. Part of me admires him. And part of me thinks he's barking.
Posted by John Medd on Sunday, August 18, 2013
Labels: Rutherford Chang, The Beatles, The White Album, White Supremacy