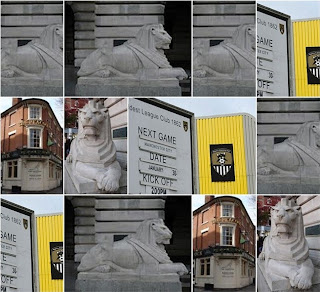 I lived in Nottingham for twenty five years and frequented many of the same haunts as Charlie Resnick: The Peacock on Mansfield Road was the perfect oasis for a pint and a gleg of the Evening Post and, like Resnick, I acquired many of my jazz records from The Music Inn tucked away in The West End Arcade. If I was hooking up with friends in town it was de rigeuer to meet them in Slab Square by the Left Lion (never the right) and every other Saturday during the football season you'd find me down the Lane: Meadow Lane, home to Charlie's team, Notts County (The Magpies). Other salubrious venues where our paths might have crossed would have included the Arboretum, Bentinck Hotel, Warsaw Diner, Victoria Market, Golden Fleece and The Bell.

But, of course, our paths never did cross. That's because Charlie Resnick never really existed. Well, he existed in my head. And in his creator's head, John Harvey. The reason for this sudden bout of melancholia is, in part, down to having just finished Cold In Hand the last in the Resnick canon - going back as it does to the late 80s. Charlie loved, in no particular order, jazz, sandwiches, cats, beer and Notts County. Ditto that. However, this surge of nostalgia may just be because a small part of me, every now and then, wishes I was back there. Charlie Resnick may not miss me. But I'm as sure as hell going to miss him.
Posted by John Medd on Friday, August 02, 2013
Labels: Charlie Resnick, Cold In Hand, Football, John Harvey, Meadow Lane, Nottingham, Notts County, The Peacock, You Pies