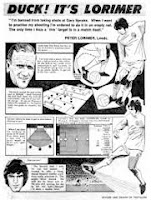 A theme park just around the corner from us unveiled its new ride this week. It made the local paper; with speed/drop/G-force stats that would make your hair, quite literally, stand on end I think it's safe to say I'll be sticking to the tea cups. Or the dodgems. But I digress. Reading the feature I was more interested in who they'd got to open this end of pier attraction. *Drum roll* Peter Lorimer! Or to give him his full title Peter 'Hot-Shot' Lorimer. A former Leeds Utd striker with a shot so fierce he was once pictured in Rothmans with his right foot cooling down in a bucket of cold water.