Welcome to another Be-Bop Friday - slightly rebadged today in honour of one of my best friends. That's Mark (Beano to his buddies) pictured above - the photograph will make perfect sense, I'm sure, by the time you've read his love letter to a band that still make the hairs on the back of his neck stand up, some four decades after he first discovered them.

"Do you remember your first kiss? Of course you do! Mine was from a girl called Sarah Blackburn, she lived on our street and I would have been maybe 10, fancied her like mad for ages. Likewise, I bet you remember the first band you discovered. I do too, and their music still gives me goosebumps to this day. At one time they were the biggest band around. They reached the dizzy heights of Number 1 no less than six times in the 70s - and remember you needed to sell a million copies in those days to reach the top spot. Three Number One 1 albums followed; one of which is considered up there with the very best live albums ever (I’ve just voted for it in Classic Rock’s best live album poll).

They made a film too, a proper one, which you went to the flicks to see. It was way ahead of its time and showed the dark side of the music business. Years after its release it would be described by BBC film critic, Mark Kermode as 'the Citizen Kane of rock musicals.' The movie subsequently went on to achieve critical acclaim.

Know who it is yet? Well, Q magazine once described  them as ‘the missing link between Oasis and the Beatles’ - Oasis would go on to record a splendid cover version of one of their hitz and then play it in front of an adoring 60,000 fans at Maine Road, Manchester. But let me guess, you still don't know who it is. (I think we do, Mark! John).

The band is SLADE, and they get little recognition for their considerable input to this great nation’s music scene other than for a certain festive hit. Not that is until you venture into my world: bitten by the bug in the early 80s via one of those compilation albums SLADE Smashes, I couldn’t believe what I was listening too. It was awesome, with that voice hitting you between the eyes like a sledgehammer. The Black Country Boyz even returned to the charts for me, reinvented with Noddy as the Rock 'n' Roll Preacher. Every locker in my school had the words ‘BEANO – SLADE’ plastered all over them: Beano being my nickname (still is, 40 years later) and SLADE being my band.

Their second coming lasted till the mid 80’s when they were cast aside chart wise, but I still got my fix by going to Slade related TV shows & and conventions - attended by the Magic 500, a bunch of like minded super fans whose sole purpose was to turn it up to 11 and 'Stamp your feet and clap your hands.' These events have created some amazing friendships which go far wider than just the love of music, and nobody can take that away; no matter what the non-disciples may think.

So, don’t forget your first love, and, remember, SLADE are for life, not just for Christmas!" 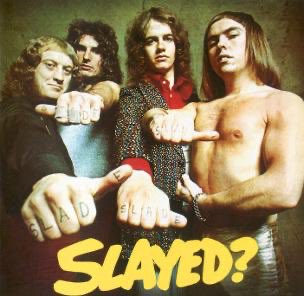 A huge thank you to Mark for this. As you can see, Beano is now the proud owner of Jim Lea's confetti jacket - the one he wore on the front cover of their 1972 album, Slayed? Though I'm told it's a little on the snug side.