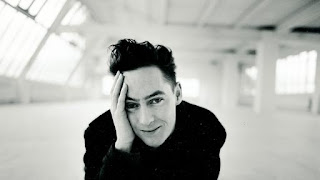 I've said it on here before, but I love songwriting. The idea of starting the day with a blank piece of paper and finishing it with a bunch of lyrics hanging on a melody that hadn't existed when the sun came up is still a fantastic feeling. My dalliance with the craft can best be described as fleeting - I only flirt with it (I'd love to commit, but I'm hampered by my questionable ability), hence if I write two songs a year then I'm doing well. To make up for my cripplingly low output I bask in the songs of others; proper songwriters.

So what makes a proper songwriter? You know how good a songwriter is when your peers want to cover your songs. Roddy Frame is one such exponent. Both with Aztec Camera and solo his mastery of the dark art is not up for debate. Clive Gregson (no songwriting slouch he) obviously concurs. In 1990 when Clive was still knocking around with Christine Collister they recorded a beguiling version of one of Roddy's signature tunes as part of a blinding covers collection entitled Love is a Strange Hotel. It still knocks me for six every time I hear it. But here's the original. And this knocks me for seven.