I was certainly standing on the shoulders of giants when I commissioned myself to write this homage series; the idea that there are 10 objects I'd run into a burning building to rescue is really nothing more than me storing my thoughts in a safe place so that I can maybe look at them again when my memory maybe isn't as sharp as it is now. Which, in all honesty, is probably why, a decade after I started, I regularly update this journal, this web log. (Without getting too deep here, I'm not afraid of dying; but I am afraid of getting old; there, I've said it. When I look back at my life thus far I often think that much of it happened to somebody else, not me; a version of me, but not the me I recognise through the lens of 2020.)

But I digress. I said at the outset of this project that I would also mention the items that didn't make the cut. Of course I can't possibly list all the trinkets that have come into my possession over the last six decades. But here are a few that just missed the crucial cut off: my paperback copy of Magnus Mills' All Quiet on the Orient Express; my guitar; the bagatelle Santa put in my sack in 1966; a square of my Nanna's sewing; a set of Beatles autographs (fakes, but I don't care); one of my (many) watches; my mother's music box; the mixing bowl I use to make bread. All precious to me, but not as precious as this.

I've wanged on about this band quite a lot around here so, I won't bore you any further; suffice it to say this is my last item and these are the stats.

Who's it by? The Sweet

When and where purchased? January 1973/Grantham Market

Has there ever been a better single released since? Hell, no!

Will it be going in my coffin with me? Of course 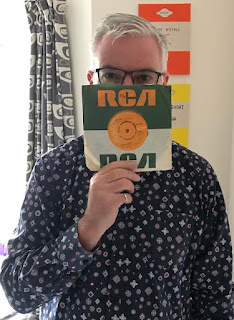