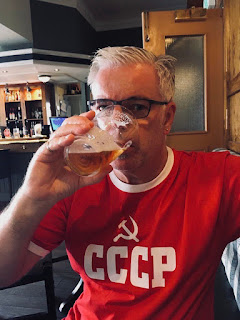 This morning at 10.30am will see the long overdue publication of the Russia Report. The fact that Johnson and Cummings are in it up to their scrawny little necks is a given; we don't need a 50,000 word dossier to tell us we have one of the most corrupt governments in modern history. Or maybe we do. My faith in due political process is being pushed to new limits every day. Each day brings with it a cavalcade of fresh horrors that are quickly relegated to tomorrow's chip wrappers when yet more dead cats are thrown into proceedings. But this isn't the time or place* to throw shit around; like a lot of people I may have become more politically attuned since 2016 (everything was broken by the Brexit referendum), but save for the odd outburst I try to park my political views; which is not always easy.


Moving on, here's a link to a rather tasty Soviet mix from the Number One Son: three shin-kicking tunes that, remarkably, all carry the line  'Discussions with Russians'. Very timely, James! The song that opens proceedings is the first single ever released on the Stiff record label from the self proclaimed Jesus of Cool.

I'm afraid tracks 2 and 3 that make up the playlist - great though they are - are both acts I know precious little about. Maybe James can shed some light on them...


* Twitter's the place for that sort of thing.
Posted by John Medd on Tuesday, July 21, 2020
Labels: Boris Johnson is a cunt, James Medd, Nick Lowe, Russia