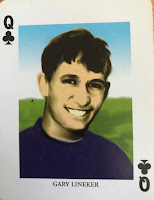 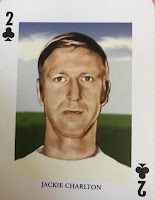 The recent passing of Jack Charlton was a sad loss not only to the world of football, but also to the world of playing cards. Let me explain. We Medds are inveterate card players; as soon as we're able to count, a place is set for us at the table and somebody deals us in.

When James was growing up and living at home he played many, many hands of Rummy, Newmarket, Predictions with friends & family, and could hold his own from a very early age.
One of the packs of cards we used depicted badly drawn footballers  - we often wondered if the artist even knew who Gary Lineker was - and it soon became our default deck. 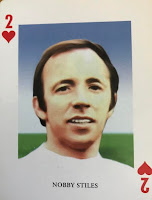 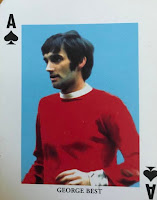 A number of catchphrases built up around several of these these hapless artist impressions: whenever Jack Charlton(a humble Two of Clubs) came out of the deck, it was met with a derisory 'Jack? He'll win you jack!' Nobby Stiles simply: 'Nobby lad!'

David Beckham, on the other hand, was quite literally the ace in the pack. Lay down the Ace of Hearts and a shout of 'Becksy's out the pen' would drown out many a game.
But now Jack joins the list of those in the pack sadly no longer with us - George Best, Bobby Moore, Stanley Matthews...
Football playing cards. Today's object. 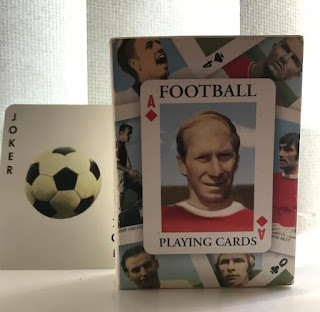