In 1977 John Noakes, Blue Peter's most unlikely Action Man, was about to climb Nelson's Column in London's Trafalgar Square - without a safety harness and wearing nothing more than a car coat and a pair of flares. His mission - to help clean pigeon guano off Nelson's noggin. 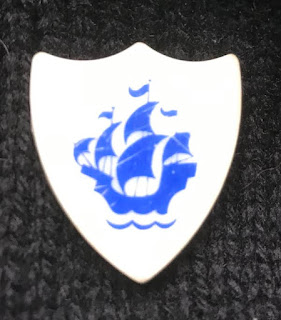 I must confess I've been looking for an excuse to show this classic bit of footage for ages. And what better way to shoehorn it in to my blog than to include my actual Blue Peter badge - the one I received as a competition runner-up in 1968, c/w a signed letter from the show's producer, Biddy Baxter. It's been sitting in a 'badge box' (not to be confused with a badger box) full of all my old punk pins - Generation X, Buzzcocks, Radio Stars et al - for donkey's years. So I'm pleased to elevate it, finally, to treasured status. It is my fourth object.

The non-Shep related quote below is taken from Noakes' IMDb page. It's from the commentary he overdubbed on to the film afterwards; as opposed to the ongoing nervous dialogue he's having with his appointed sherpa, and the BBC camera man during his assent (both of whom are also wearing precisely the same amount of PPE as Noakes i.e. bugger all).

"At this level, the plinth on which Nelson stands overhangs the column. I found myself literally hanging from the ladder with nothing at all beneath me."