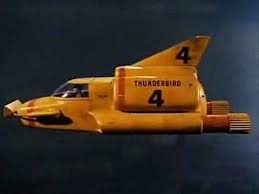 Despite assurances from many Beatles scholars to the contrary, I can't shake the notion that - even if only in a subliminal way - the idea for Yellow Submarine came from Thunderbirds. Thunderbird 4 - first seen on UK television screens* in 1964 - is yellow, and is a submarine. Step forward Gerry Anderson and take your rightful place in Beatles history.

However, since Anderson passed away in 2012, it will probably be simpler for Macca to 'come out' and be ingratiated into the extended Tracy family. Full speed ahead.

* I am aware that TV in this country at the time was black and white, but Thunderbird merchandising, though in its infancy, (comics, toys etc.) was still a thing.