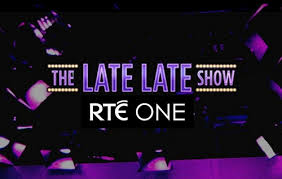 The Late Late Show comes out of Dublin every Friday night and is as Irish as, I don't know, leprechauns. The Blarney Stone. Father Ted. Tell you what, roll all three of those into one, put it into an RTÉ television studio and that's the Late Late (as it's known over there). It's been running since 1961 and in that time has only had five presenters, including the saint like Gay Byrne and the irrepressible Gerry Ryan.

D. Cullen on the other hand, whilst very much Irish, is still only a gossoon; he's barely old enough to remember the Millennium. But that didn't stop him playing his new single on the show earlier this month; or bringing a choir with him. Fair play. I think if I was debuting my new single on Ireland's Number 1 chat show, I'd bring along a choir. And a tasty horn section. And a few friends too, what the hell.

So, I don't know what it is - whether it's his voice, the piano, the tempo, or even the choir but I definitely get the feeling John Lennon would approve. I certainly do - it's a shoo in for my end of year Best Of, to be sure.