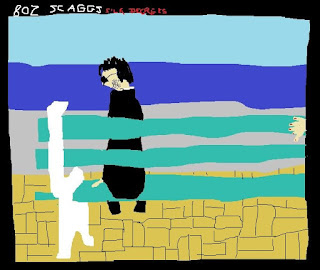 I'm driving north of the border tomorrow; the Scots were still part of the Union last time I looked - so no border checks. But that could all change. What, you don't believe me?

But I digress. Not only do I love it up there, but I love the journey too; it's a helluva way, but the driving doesn't bother me. I've got loads of podcasts and playlists* all teed up so the miles will positively fly by. A spot of lunch en route and the Gretna signs will be looming large before you know it. Then chuck a left onto the A75, and remember to apply the brakes just before the Irish Sea: "You have arrived at your destination, the noo."

* Boz Scaggs is sure to make an appearance tomorrow. Although the above (badly drawn) artwork is a depiction of his 1977 Silk Degrees album, I've been a huge fan of a record Scaggs put out nearly a quarter  of a century later: Dig, from 2001, is peerless. It's got soul, it's got passion and it's chock-a-block full of great tunes. He never bettered it; that's for sure. So, somewhere between, I'm guessing, Keele Services and Shap there may well be a Boz hour. Or two.