Tommy this and Tommy that 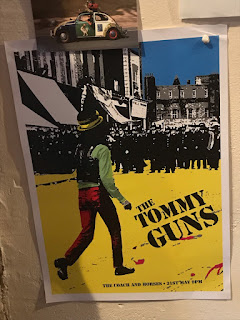 I may have a thing about Led Zeppelin tribute bands; I said as much here, and here. And, after my recent to the west coast of Scotland, I could soon be hurtling down a similar rabbit hole with Clash copycats.

It comes on the back of me seeing the above flyer in a cracking little music boozer in Dumfries - imagine a low rent O2 crossed with the Clansman and you've got the picture. And what a picture. The Tommy Guns have utilised that iconic photo of Don Letts squaring up to the rozzers during the Notting Hill Carnival Riots of 1976 to great effect.

As an aside, I used to work alongside a fella called Tommy Dunne. And if you listen carefully to this masterpiece by the New Piccadillys* you'll hear not only Complete Control, but also a final Tommy Gun flourish.

* A huge thank you to The Swede for pointing me in the direction of this slice of brilliantness (seeing Joe and Mick behind the glass in Supermarionation is, as TS said, genius).
Posted by John Medd on Tuesday, September 24, 2019
Labels: Don Letts, Dumfries, Joe Strummer, Led Zeppelin, Mick Jones, Rudyard Kipling, The Clash, The New Piccadillys, The Swede, The Tommy Guns, Tommy