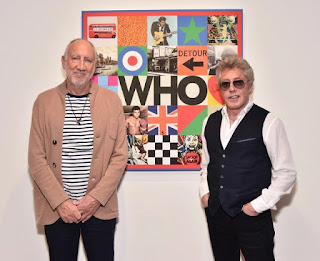 You'll have noticed in the last week or so that Roger Daltrey and Pete Townshend have announced plans to take their mobility scooters back on the road one more (last?) time. Although it's 40 years since their drummer died and nearly 20 since they were left bassless, it will still say The Who on the tickets, and the new album too. Will Keith Moon and John Entwistle be looking on wistfully? Who knows.

I can't comment on the the new album - 'Who' isn't out yet - but I have heard the single Ball & Chain and, you know what, it's really rather good. Don't get me wrong, it's nothing more than the Who by numbers, if you'll excuse a namecheck within a namecheck, but that doesn't mean it's not without merit. Daltrey's voice is just about holding up (unlike, say, his fellow septuagenarian mate Paul McCartney) and Townshend's near deafness is clearly not an issue for him in the studio.

But don't take my word for it, listen for yerself.