Away From the Numbers 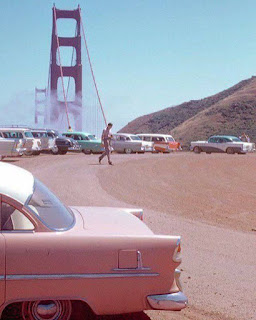 Some very interesting photos appeared on my Twitter feed today - not least that one of the Black Hole. It's 55 million light years away (1 light year = 6 trillion miles) and measures, at least, a billion miles across. Just thinking about what those numbers mean hurts my brain; so I'll park it up for now and come back to it when I've had a little lie down.

In the meantime, the one above is a lot easier to get your head around - the Golden Gate Bridge taken in the early 1960s. So that makes it roughly 5,500 miles and 50 years away. I can cope with numbers like that. I just love everything about this photograph - if there's been a better photo taken of San Francisco's iconic landmark, I've not seen it.
Posted by John Medd on Wednesday, April 10, 2019
Labels: San Francisco, The Black Hole, The Jam, Twitter