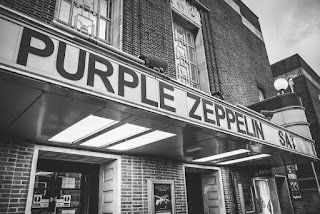 Rock and Roll is built on riffs. Always has been, always will be. Some good ('Satisfaction'*), some not so good ('Smoke on the Water'). Either way, they're the tune within the tune: the bit you sing in your head. Or play air guitar to if you're on your own. In an empty house. With the curtains drawn.

I'm sure if you trawl back through my backpages you'll find loads of examples. I was thinking the other day who's writing the good riffs today; the ones that guitar shops ban the kids from playing when they're road testing a new Les Paul (other guitars are available)? - 'Stairway' DENIED! Anyone who is familiar with Greta Van Fleet will know that they've shamelessly plundered the Led Zeppelin back catalogue, changed a few titles, and have, effectively, released a bunch of Zeppelin outtakes. Think Custard Pie, think Dancing Days, think Greta Van Fleet. Great riffs though.

Here's one from a few years back that haunts me to this day. When Jack White wrote The Hardest Button to Button he planted an ear-worm so large in my head I'm surprised people can't see it waving at them as I walk around. And, like Greta Van Fleet, White is paying homage to the God of Riffs - namely Jimmy Page - without whom Rock and Roll would have died out years ago.


* Interestingly, when Devo covered Satisfaction they left the riff in its box and never referred to it once. Not once.
Posted by John Medd on Monday, April 08, 2019
Labels: 2003, Devo, Greta Van Fleet, Hardest Button to Button, Jack White, Led Zeppelin, White Stripes