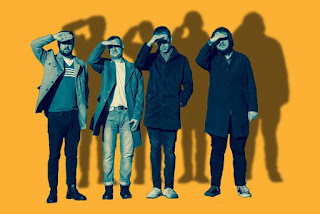 I know I've said it before, but helluva lot of new stuff I listen to comes care of the Number One Son. Almost since I first introduced him to the Beatles back when he was still in his cot, James has been my constant sherpa when it comes to navigating treacherous indie landfill and other, equally dangerous, hazards. His end of year roundups, in particular, are a thing of beauty - and also very small - appearing as they do these days on a micro SD card.

I don't know if Man & The Echo will make this year's cut (it is, after all, still only April), but Capable Man appeared on my phone yesterday complete with a simple instruction: 'Listen to this, Old Man!' So I did. It could be a contender. See what you think.