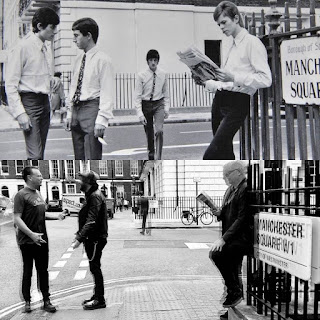 A midweek smash and grab raid on that London yesterday. Quality time spent in the company of Brother Mondo and Brother Steve. We zoned in on some of the West One Squares with Beatles and Bowie connections. And nearby pubs too. Obvs. First, the EMI Building in Manchester Square and, just around the corner, is where David Jones was snapped reading all about it. We volunteered a German passer by, showed her Bowie's pic and asked her to recreate same; despite a bit of camera shake, I think we just about get away with it. 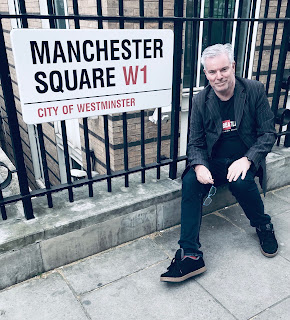 Staying in the same zip code you then come across Montagu Square - it's actually a rectangle - and situated at No. 34 is where John Lennon holed up for most of '68. It's not Strawberry Fields, but it's got a blue plaque outside, nonetheless.

A huge thank you to the boys for another great trip to the capital. Let's do it again in the Summer.