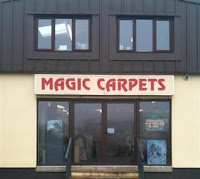 Yesterday on BBC Radio London the venerable Danny Baker was looking for custodians of various modes of transport. Thanks to The Candyman I am now in charge of Magic Carpets. Will this mean letters after my name? Will it get me a table in exclusive fancy dan restaurants? Probably not. Though a badge would be nice.

So what will I do during my tenure? Well, for starters, a recent song of mine, Magic Carpet, will be dedicated to the Danster. Along with three more Johnny Medd originals I've been road-testing in local folk clubs, it'll be on a little EP I'll be putting out later in the Summer; with the knob twiddling expertise of The Number One Son, we'll shortly be spending a couple of days in his new Manchester studios.
Posted by John Medd on Thursday, June 16, 2011
Labels: Danny Baker, Magic Carpets, Manchester