The boys at the Met Office were pretty wide of the mark (again) this Bank Holiday, so it was time to come indoors, dim the houselights, and watch a classic British movie.
In Gumshoe, Albert Finney plays the Walter Mittyesque Eddie Ginley; a bingo caller at his local working mens club who, when offering his Private Eye services in the local rag, finds himself well and truly out of his depth. With able support from Billie Whitelaw and Frank Finlay, it's a cracking little homage to Raymond Chandler and is full of social history in a very down at heel 1971 Liverpool. What's also memorable is the soundtrack; not only is it very striking, but it's also written by someone who you would never associate with this genre of film. Andrew Lloyd Webber, for it was he, gave the movie a certain gravitas and, with the help of a young Tim Rice, wrote the classic rocker you hear at the film's denouement.

Roy Young: Baby, You're Good For Me


Roy Young has an interesting back-story: he was one of Jack Good's protégés who was hired for the Oh Boy TV show in the late 50s before recording with The John Barry Seven and then touring extensively with Cliff and The Shads. From there it was only a hop skip and a 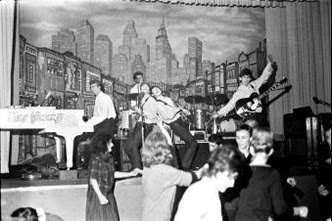 jump to the 2i's Coffee Bar in London before landing a slot at The Top Ten Club in Hamburg. And it was while he was at The Star Club he joined forces with Ringo Starr and Tony Sheridan, where they became the house band. Brian Epstein offered him a recording contract (with his then friends, The Beatles) but Roy couldn't get out of the deal he'd signed in Germany.

His career then took in stints with Cliff Bennett and The Rebel Rousers (they recorded a version of Got To Get You Into My Life with a little help from Macca), Long John Baldry, Chuck Berry (it was with The Roy Young Band that Berry recorded the infamous My Ding-A-Ling No.1 single) and Jeff Beck. Then in 1976 Young was called in by David Bowie to play some keyboards on his Low album.

Young spent much of the 80s in America touring with Ian Hunter and Mick Ronson. In 1995 he got back together with many of the musicians from Hamburg, including Tony Sheridan, and recorded a tribute album to The Fab 4.

These days Roy can be seen treading the boards at all the major rock'n'roll conventions in the UK and Europe. Despite being an unsung hero for much of his career, Roy's credentials as one of this country's finest rock & roll piano players has meant that he's never been out of work; his contribution to the British music scene over the last 50 years will always be more than a footnote.
Posted by John Medd on Tuesday, June 01, 2010
Labels: Albert Finney, Gumshoe, Roy Young, The Beatles