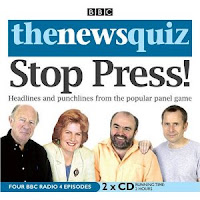 The News Quiz on Radio 4 never fails to put a smile on my face. They say the best pictures are on radio and, as good as Merton and Hislop are on the telly, Jeremy Hardy and Andy Hamilton* shade it on points most weeks. Last Friday saw Fred MacAulay and Armando Iannucci riffing on the subject of acronyms: following on from Sandi Toksvig's tale of a girl she was at at Uni with who proudly wore a Cambridge University Netball Team sweatshirt, MacAulay and Iannucci came up with The Scottish Hospitals Information Trust. And then, naturally, The Scottish Hospitals Information Trust Executive.

Andy Partridge probably didn't have acronyms in mind when he penned this personal diatribe directed at his ex-wife.

* Mrs M was having lunch with a friend in Birmingham's Mailbox last week when she spotted AH dining alone at the table behind theirs
Posted by John Medd on Wednesday, June 09, 2010
Labels: andy hamilton, andy partridge, the news quiz, xtc, your dictionary