Back in '66 when we hosted The World Cup, The FA used eight grounds across the country. Can you name them? Without googling the answer (and unless you're of a certain age), the chances are you'll probably be able to reel off the first seven: Wembley (obviously), Old Trafford, Hillsborough, Villa Park, Goodison Park, Ayresome Park and Roker Park. But who remembers the eighth? Was it Highbury? White Hart Lane? Well, it was in London; was being the relevant word in that sentence.

The ground nobody remembers is White City. Or to give it its full title, White City Stadium. 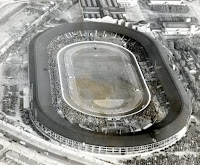 Opened in 1908 for the Olympics it had a running track & a cycle track and the infield was blessed with both swimming and diving pools. So how did it come to feature in The World Cup? Unlike today, back in the swinging sixties we didn't live, breathe and sleep football (groan) so when the Wembley bosses wouldn't cancel the dog racing for the night, WC stepped in. They only put the one game on, Uraguay v France, and then it was business as usual. In its lifetime it played host to not only athletics and cycling but rugby union, speedway and greyhound racing. They even put on the odd gig.

In July 1973 a festival that included Edgar Winter, Sly & The Family Stone and Canned Heat played to a full house. The Kinks headlined that day and it wasn't without incident. That said it was rare indeed for a Kinks gig to pass without incident. Ray Davies let his potty mouth get the better of him and resigned from the band live on stage. His missus had just left him and poor old Ray went into meltdown. It wasn't the first time, nor would it be the last.