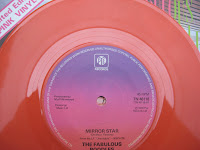 I like The Fabulous Poodles. I also like Lego. What do you think the odds would be on somebody shooting a film and combining the two?
Not as high as you'd think, apparently.


When punk gave up the ghost and the new wave took over, it was left to this bunch of comedians, fronted by Tony de Meur, to make one of the best singles of 1978. Produced by Muff Winwood, and on pink vinyl, it even got them on TOTP. But my abiding memory of the Poodles was a corking John Peel session, where they put the wind up (My Fair Lady's) On The Street Where You Live. That and the fact that their Think Pink album came out in a 24'' sleeve, which I lugged 'round the West End all day.
Posted by John Medd on Friday, June 18, 2010
Labels: Fabulous Poodles, Mirror Star, Pink Vinyl, Pye