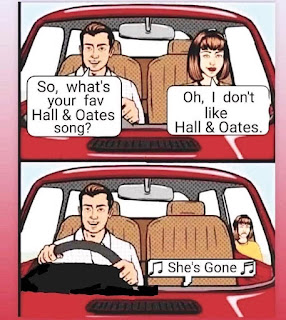 Daryl Franklin Hohl and John William Oates made some astonishing records in the 70s and 80s. I can honestly say, to the best of my knowledge, everyone I know could sing the words to at least one of their records; at least one. Which is why, if you ever rode shotgun with me in my car, unlike the young woman above, I'm sure I wouldn't have to leave you stranded by the roadside.

She's Gone first appeared on their 1973 classic album Abandoned Luncheonette. It bombed when they first released it as a single on Atlantic but three years later when the duo had scored some big hits with their new label, RCA, Atlantic re-released it with a fresh catalogue number and voila it went to Number 7 on the Billboard chart.

Tho' the record had charted a couple of years earlier when this lot released it as a single; it may only have just scraped into the Top 50, but many purists say it's the definitive version.