Guitarists off the leash (#1*) 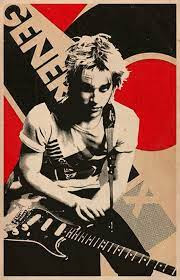 On the back of my guitar solo piece a couple of weeks ago I was really interested in some of the comments that were posted in response; not least by old friend of this blog, Artog. Artog comes, and Artog goes; but when he does put his head above the parapet, usually once every five years or so (I suspect he's part of the witness protection program), I always take note. He said he loves it when guitarists do fucked up things. I told him I did too. For instance, Bob 'Derwood' Andrews' from Generation X leaves his calling card all over their first (and best) album. But he was doing it long before on this, the definitive version of No No No (not the cleaner album version or even the John Peel session) - it appeared on the flip side of Ready Steady Go released in February '78. Fast forward to 3:04 and hear Derwood as he tries to keep it together, then listing at the end before finally, and inevitably, slipping anchor. Marvellous stuff, I think you'll agree.

* Don't hold your breath for #2 - me and long running series don't mix very well. I leave that kind of behaviour to the ineffable Rol.