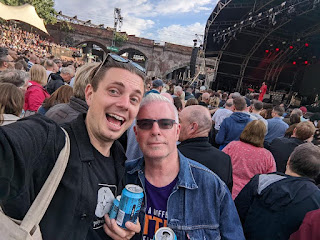 Last night was special; in fact the whole of yesterday was special. I got to spend some quality time with James: we revelled in each other's company in Manchester visiting several choice  hostelries in what has, for the last 10 years, been James' adopted home city. Our Big Boys Beano culminated not in the Bamboo Club (if you know, you know) but at the Castlefield Bowl, a quirky outdoor pavilion venue situated in the heart of M3, where it played host to the last night of Crowded House's  2022 UK tour.

James originally bought these tickets in 2019 but Covid meant that the gig - and its original rearranged date - was pulled. So last night, in more ways than one, was a case of unfinished business; nether of us had seen the band live before1 but we both have Woodface living in our heads2 24/7. I mentioned a couple of months ago that the majority of gigs I've been to this year have been very intimate shows - shows in small venues where inevitably I've been on the front row; so seeing a 'stadium band' in an amphitheater really did mean stepping out of my comfort zone. However, I needn't have worried. The sound was brilliant, our view was perfect and crowd were amazing (even waiving at the trains on the overhead viaduct as they trundled in and out of Oxford Road station).  And the band didn't disappoint.  I was putty in their hands from the opening bars of set opener Distant Sun to the final coda of Chocolate Cake and everything in between3. Who wouldn't be? So, outdoor gigs - I'm not saying it's the way forward - who knows where that might lead - but as an occasional antidote fto the confines of sweaty rock clubs and upstairs rooms in pubs it was certainly a breath of fresh air. Literally. Let's do it again soon, James!

2  Where it flat shares with the entire Beatles back catalogue

As PSs go this is a zinger: did I mention that Johnny Marr4 joined them on stage for Weather With You? 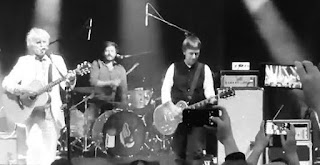