Where the action isn't; that's where it is 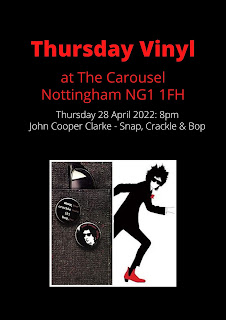 I did last month's Thursday Vinyl on autopilot; I'd not been back in the country long and sleep had been a stranger to me for the previous 48 hours. Fair play to Alan, my second in command, who brought the room up to speed with all things Devo while I nodded sagely, as opposed to off.

This month, however, I'll be buzzing. Wide eyed and bushy tailed I'll be telling you why I think John Cooper Clarke's 1980 album Snap, Crackle & Bop is more punk than the Pistols, more cathartic than the Clash. (And more dastardly than the Damned.) Evidently Chickentown and Beasley Street alone prove that JCC has guaranteed his top table status along side Lydon, Strummer et al.

Come on down as Mr. Crowther used to say. It's free and it's fun. And, like the bloke who can't pronounce his f's and th's, you can't say fairer than that. Even if you can't make it to Nottingham's liveliest arts centre on the 28th, tell me what album you'd like me to play for a future session and I'll see if we can't put it under the microscope and marvel at it.

Perversely, for today's musical interlude, I've deliberately not gone with a cut from 'Snap', instead I've opted for an absolute banger from Inspiral Carpets. But you won't be disappointed - check out Doctor Reliable's cameo at 2:34.