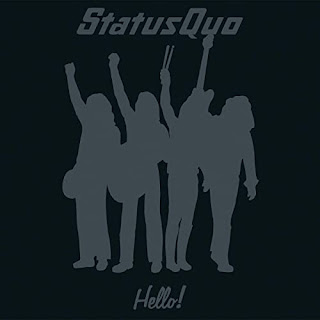 My listening tastes are all over the place at the moment. I blame lockdown. As much as I like to keep an eye on what's currently shakin' on the hill I find myself wandering back, way back; see posts passim - not least this from yesterday. I guess if I was to sum up in a sentence where I am I'd have to borrow a strap line from the wonderful Sun Dried Sparrows : "I was born in the 60s so I grew up in the 70s - that's all you need to know." Perfect. That's me.

So, over the last few days, I have mainly been listening to 'the Quo'. Often derided, often ridiculed, but there was a time when the three chord wonders from south London with a penchant for double denim couldn't put a white trainered foot wrong.

And what time would that be I hear you ask? Well, since I've never been one to shirk a question (a career in politics has never beckoned) I can tell you that you're looking at the period 1973-75. In particular a trilogy (holy?) of albums that still stands the test of time - Hello! ('73), Quo ('74) and On the Level ('75). In fact I'd go as far as to say you don't need any other Quo albums (or indeed singles); everything you could possibly want is contained within these three giant slabs of no nonsense, heads down see you at the end, boogie. 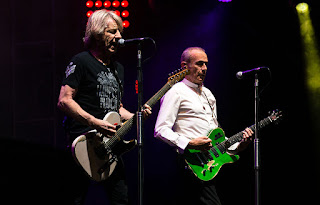 That said, a rather tasty book-end to their story came about  a couple of years back kickstarted by way of an acoustic (Aquostic, if you will) gig they did at London's Roundhouse in October 2014. Recorded only two years before Rick Parfitt's untimely demise in December 2016, it captures the band in a less frantic setting and eschewing their trademark duh duh duh duh sound. I caught it on BBC 4 when it was first broadcast and loved every minute of it.

This is from their Hello! album. You may remember it sounding like this.