No guitar, no concertina 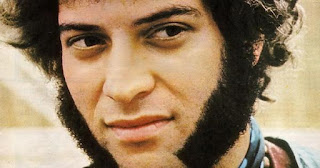 Reading a review of a recent Mungo Jerry compilation* sums the band up as follows: 'Doing the simple thing well and in a memorable way is a far harder skill than it might appear, but Mungo Jerry had in spades.' Quite. Starting life as a skiffle/jug band they scored their first Number One in 1970 with 'In the Summertime' and a little later - when they'd expanded their sound and embraced the stompiness (if that's even a word) of glam - a second with 'Baby Jump'.
So it was on the back of these flattering words that I decided to dig out their first album: 'Mungo Jerry' was released in 1970 and captured a band that already were fast becoming a festival favourite; that may sound a tad trite but just have a look at some early footage from the period and you'll see what I mean.
I only have one problem with this album - and it's not even a problem as such, more an observation: in 1970 jug bands were all about keeping it real - banjos, upright pianos, harmonicas and jugs (obviously) were a staple part of their sound; so too were kazoos. To the point that when I listen to some of the selections on this (mostly great) album there are times when instead of seeing their mutton chopped leader Ray Dorset (pictured above) belting out another Alright Alright Alright, all I can picture in my head is a grey fluffy puppet character who, as Sooty's nemesis, was always getting into - what were referred to in the 70s as - scrapes. I speak, of course, of Sweep. Probably, after Eric Morecambe, the funniest funny man** of the decade.
OK then, here are exhibits A & B. First up, a fabulous song from an album nearly as old as me.
Mungo Jerry - Maggie (1970)
And here we have one of the finest comedy sketches of the 1970s. Fast forward if you will to 22:40 to see what happens when Sooty decides to perform a violin recital. Just listen to the anguish in Sweep's voice as Mr. Harry repeatedly sends him away with a flea in his ear. 'No guitar and no concertina' is my new mantra.
Sooty and Sweep
* This latest collection is rather clumsily titled 'A & B sides & EP Tracks 1970-75'. Though anyone buying it couldn't possibly argue its moniker was in anyway ambiguous.
** Sorry, dishevelled glove puppet.
Posted by John Medd on Monday, February 08, 2021
Labels: 1970, Mungo Jerry, Sooty and Sweep