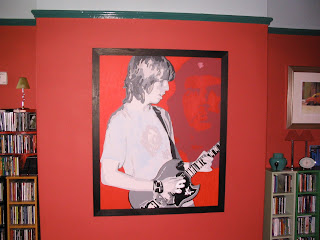 The Summer of 2005 was a brilliant Summer for all sorts of reasons - Phill Jupitus came to Medd Towers and did his breakfast show live from our lounge and we took James to New York for the first time (he loved it so much we went back the following year).
It was also the Summer an artist friend of mine, Gerry Laffy, painted James. Still only 15, James was in a band that were tearing up trees at the time. Winning Battle of the Bands, recording a dazzling EP and getting played on the radio - I wanted a permanent reminder of just how amazing (and how amazingly proud of him I was - and still am) that time was. 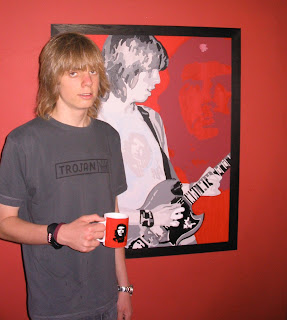 Gerry didn't disappoint. While we were in NYC I was regularly checking my emails in sleazy internet cafés (remember them?) where Gerry was emailing me progress photos of his painting. The final one being of the canvas drying in his north London back garden.

A couple of days after returning from America I bombed down to Swiss Cottage and picked up the canvas which, even with the back seats folded down, only just fitted in the back of the car. James' mind was blown when he first saw it. Truth be known, 15 years later, it probably still blows his mind whenever he comes back home to visit his mother and father. 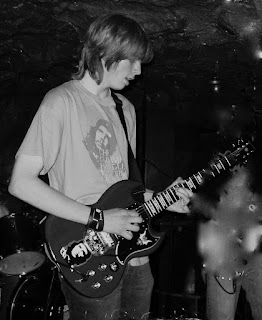 The reason for the delay in posting this is that I was desperately trying to find the photo of me and Gerry posing in his kitchen in front of the canvas. But could I find it? Three house moves in seven years and despite thinking I knew where the photo lived I suspect it might be in one of the as yet still unopened packing cases. I will find it!