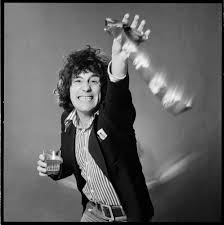 As a youth it always struck me as odd that whilst all the bands I was routinely listening to at the time were way younger than my dad (with quite a few being not that much older than me), there was one glaring exception: step forward Alex Harvey. Born and raised in Glasgow's infamous Gorbals and playing rock & roll in pubs from the time he could walk, Harvey's life did not, in any way, mirror that of Gordon Medd; yet they were both born nearly five years before WW2.

"He's older than my dad" I can remember me saying on the bus down to south east London when I saw him support the Who at Charlton in 1976. "He's older than my bloody dad!" Though when he and his band burst onto the stage that afternoon and played the opening bars of Faith Healer, any thoughts I may have had regarding either Harvey's mobility, or indeed faculties, were soon dispelled.

Alex Harvey passed away in 1982. My dad had never heard of him.
Posted by John Medd on Friday, September 25, 2020
Labels: Alex Harvey, Gordon Medd