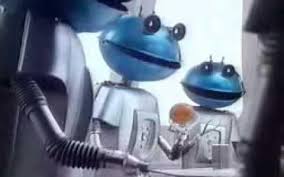 Apparently the definition of a novelty song is a comical or nonsensical song, performed principally for its comical effect. OK, it's a point of view. I must 'fess up to owning several exponents of the genre and whist freely admitting they don't exactly pass for high art, the very word novelty is pejorative and as such you'll find no further mention of it here; he said hoity-toitedly. (Although as a kid I remember being a fan of Ed Stewpot Stewart's Radio 1 show and didn't bat an eyelid when Sparky or the Banana Boat Song was played. Every. Sodding. Week).

I've mentioned, I'm sure, Monster Mash before on here. Probably when I was working in the lab; late one night. I won't, therefore, play it again today. Well, not that version version anyway. Here's the thing: if Bobby Pickett's 1962* graveyard smash is a novelty niche record, what the hell is this blistering version of said recording sung in Spanish?

You wait 10 years for a novelty record...


Those with a highly tuned ear will have worked out by now that Monster Mash was basically 'Alley Oop' re-badged. Gary Paxton had produced the one-off hit (it certainly caught on in a flash) for the the Hollywood Argyles a couple of years earlier, and saw no reason not to tart it up and give it a monster workout.


Bowie completists may or may not know that the Life on Mars line 'Look at Those Cavemen Go' was lifted from Alley Oop. You're welcome.