Are You Ready Steve? 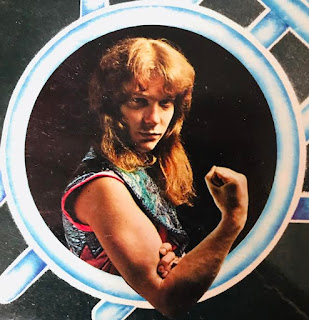 Not all heroes wear capes. But mine do. (And I still have several scrapbooks* to prove it). Although we never met**, Steve Priest and I did, in the late 90s, exchange many emails: in 1997 we were both on the brand new AOL and, for reasons that escape me now, we would regularly have real time chitchats - me in the UK, Steve in California - where he'd been living since the 80s.

Between 1972 and 1974 Steve and his three amigos*** were rarely off our TV screens; their tub-thumping glam anthems are the very touchstone of this blog (see the bar on the LHS of this blog if you don't believe me) and as such made the Sweet a household name; Thursday nights in the early 70s - when Top of the Pops was in its pomp - saw the majority of British teenagers glued to their sofas for the best part of 40 minutes whilst at the same time wishing their parents would just bugger off and let them soak up these glam(orous) sights and sounds alone.

And that's how I want to remember Steve who sadly passed away yesterday: the clutch of singles (and blistering B sides)& string of albums his band made in just a handful of years are the very building blocks the rest of my record collection was built on.

* I found half a dozen scrapbooks at my dad's just before lockdown - all full to the gunnels of Sweet photos and cuttings. After lockdown I'll try and post some extracts on here.
** Unlike Brian Connolly. Here is the link to my infamous Brian Connolly story.