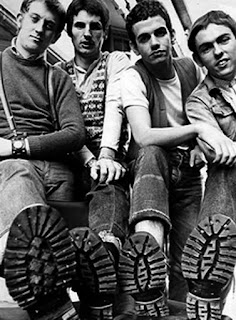 It was Sandy Denny who asked the perennial question: Who knows where the time goes? And having recently compiled a photo book for James' 30th - a job that saw me rifling thru literally thousands of photographs, slides and digital images - I know. God, I know. But, like asking how they get the stripes into a tube of toothpaste - we all kinda pretend not to.

Which brings me to today's offering. Anyone still following me after all these years will know the glue that binds this whole shaky caravan together is four parts shooting from the hip, one part premeditated. Themes or lists (apart from annual roundups) happen when they happen, or, most likely, don't happen when they don't happen. But, for some unfathomable reason I have five songs in my head that were all released in 1970. And even those at the back of the class will know that that's 50 years ago in anyone's language.

So, rather than blurt them all out in one hit I'm going to release them into the ether one at a time.

First up, Slade. Long before Noddy Holder discovered mirrored top hats and indeed before Dave Hill found an alternative use for Bacofoil, Slade were a bunch of Black Country skinheads trying to catch a break. They obviously succeeeded, but not before dispensing with the Ben Shermans, Sta Press and 14 eye DMs (your mum probably called 'em bovver boots). And they sounded like this: