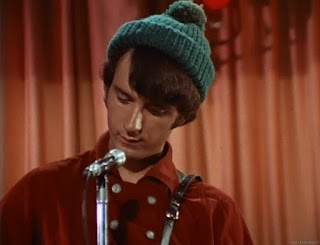 I''m really looking forward to reading the Michael Nesmith autobiography I've just ordered - Infinite Tuesday. Whilst I think all four Monkees are fascinating individuals, there's something about the one they call Nez that I can't quite put my finger on. And no, it's not his trademark wooly hat, though I will be hugely disappointed if I find his titfer hasn't been granted its own chapter.

As part of a research project I'm currently carrying out - putting the case for his 1972 album And the Hits Just Keep on Comin' being one of the greatest recordings of the 20th Century - it will, I'm sure, prove invaluable. In 1972 you won't be surprised to learn that I was still watching the Monkees syndicated TV reruns on our newly acquired Radio Rentals telly; I had no idea that Nesmith had already left the band, ditched the hat, grown a beard and single handedly invented Alt. Country. All I knew back in 1972 was that Last Train to Clarksville was a song I knew I would love for the rest of my life* and that I really wanted my dad to trade in his J reg. Hillman Hunter for a Monkeemobile**.