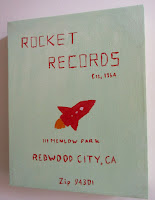 Rocket Records in Redwood City first opened its doors in 1964 at the height of Beatlemania. And, after Amoeba (twenty-four miles up the Interstate in San Francisco), was the second biggest record outlet in the state of California. However, news has just come in that, a couple of months shy of its fifty first birthday, they've shut up shop for the last time.
One of the many things that set Rocket apart from its competitors was its visitors' book: everyone who walked through their bright red front door (irrespective of whether they'd made a purchase or not) was encouraged to sign their book. I say book, when the receivers came in last week they took control of fifty A4 bound volumes - one for every year. Rumour has it that the Frank Zappa and Jim Morrison signatures in there are for real; though probably not the Mick Jagger or (several) John Lennons.
Posted by John Medd on Thursday, December 31, 2015
Labels: Art, John Lennon, Redwood City, Rocket Records