I always like to learn at least one new fact each day: something I didn't know the day before. That and counting three good things that have happened to me each day before I go to sleep. Some days that's easier than others.

But discovering new things that you know will enrich your life forever is something that doesn't happen every day. And if you think I mean discovering inner peace or lining up my chakras then you obviously don't know me very well. No, I mean things that have blindsided me out of nowhere. You may call them trivial, but I would argue otherwise. So here are five things that I discovered this year.

I recently ordered the cheeseboard in a newly opened pub in Leeds and was taken immediately with the bunches of frozen grapes that accompanied the cheese, crackers, cucumber and pickle. Each bite was like an instant sorbet rush that, to many, may well set their teeth on edge. Not me. Rest assured this delicacy will be coming to a menu near my dining table soon. And often.

I like beer. Who doesn't? And I like real ales. Again, what's not to like? I'm even, for my sins, a card carrying member of CAMRA. I go to beer festivals and everything. But, at the end of the day, I like the taste of beer. And as a result I'm not precious about where it comes from or, indeed, whether it calls itself cask or keg. Or Craft. And trust me on this one, many many people do. And will debate for hours about how they will only drink a particular style of beer that is brewed in a particular way and kept a particular way.
So when a friend of mine said to me recently he's rather partial to half a pint of stout and half a pint of bitter in the same pint glass, I was intrigued. So intrigued that since this recent discovery I've drunk nothing else since. The purists probably hate it. Their loss. 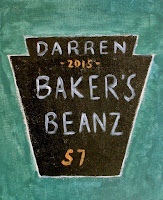 Now obviously I didn't discover art in 2015. But what I did discover is that I like doing it. And other people quite like it too: I even exhibited my work for the first time. Nothing has pleased me more this year than doing paintings for friends, especially my Penguin range, and creating unique pieces of art I know they will treasure. My friends Adele and Darren being two that spring to mind.
I've got some great ideas for 2016 and hope to show some of them here in the not too distant.


Guitar solos make all the difference

Ben Watt writes some great songs. You've only got to take one look at his output with Everything But The Girl to appreciate that. But last year he made a delightful album with Bernard Butler. And it was Butler's deft guitar work that transformed many of those tunes. Not least, this live version of Never Forget.
James Medd did something similar for me only last month. My song, What Are You Waiting For, had been languishing in the long grass for ages before James brought his magic to it.

I know I said this list was going to be trivial. But I can't put this year to bed without mentioning the most seismic thing that happened to me this year. After mum passed away in the summer my dad could so easily have hit the buffers and given up. In fact, if dad had gone first that's precisely what would have happened to mum. But he didn't. Yes, he mourned her loss (and still does, obviously) and yes he continues to live in the same house they shared for the last forty odd years. But dad is slowly coming out the other side. And, what I've discovered, certainly, is a new version of my dad. I've touched upon it before so won't dwell on it here. Suffice to say he'll be back again in a couple of weeks and will spend Christmas (and my birthday) with us and that's the only present I want this year.