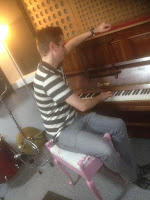 After another harmonious session in Oakwood last week with James and producer Carl Hetherington, I left the studio with a totally reworked version of You’re The One in the can. The previous take that I’d used for my Chip Off The Old Block album earlier this year was a very spartan affair; which, to be fair, is how I play it live. But when I saw the upright piano standing in the corner, looking very unloved, I knew James would have to add some keys. So, with just a five minute run through before the red light came on, The Number One Son was able to introduce some subtle flourishes to the song I wrote about nine months ago.