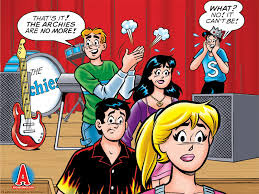 The Archies, a fictional cartoon group who had a string of bubblegum hits in the early seventies, could literally only ever be two dimensional. Unlike the young girl below, who obviously caught the eye of the BBC camera man.

Sugar Sugar was co-written by Andy Kim who later went on to record Rock Me Gently - the best Neil Diamond single Neil Diamond never sang. Kim was also a Monkee for a while (another bubblegum band who existed somewhere between the second and third dimensions) when Micky Dolenz and Davy Jones, then just down to a duo, needed a dig out with songwriting duties.