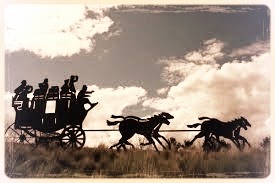 A line in Rocking Chair by Jack the Lad makes great play of the fact that riding between London and Leeds in one day was a big deal. It would have been.

Time was when the fastest way of getting between the two cities would have been aboard the mail coach. Averaging speeds of between six and eight miles per hour and stopping for fresh horses horses every 10 miles and you can see why packing an overnight bag would have been wise. That and a pistol: highwaymen weren't just a figment of Adam Ant's imagination. Having said that, East Coast Trains will take anywhere between £100 and £150 off you for travelling with them for the two hours and 10 minutes the journey takes today.

Jack the Lad were formed after Lindisfarne disbanded (the first time) and Alan Hull, vocalist and chief songwriter, went solo. The other three brought in Billy Mitchell, another Geordie singer, and together they made a handful of cracking albums on the Charisma label. I remember Fluff used to play them on his Saturday afternoon radio show in the mid seventies. He probably squeezed them in between Tony TS McPhee's Groundhogs and Genesis.