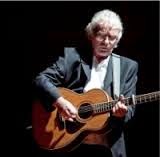 Anyone who read this from earlier in the week will know that Billy Mitchell was the guitarist and lead singer with Jack the Lad - and would later go on to replace Alan Hull in Lindisfarne. Like so many other musicians from the North East - Eric Burdon, The Wilsons, Jimmy Nail, Bob Fox, his songs have been shaped in no small way by where he came from. And no, he's never been in East Enders.

I rang Billy up in the week and did a quick Q&A, but before that, here's the opening paragraph from his online Bio:

"Billy started playing the guitar in the early sixties when they were all made of wood and mostly the same colour. He joined a folk group during the folk revival of the late sixties: The Callies showed the good people of Newcastle what folk music should sound like. They made one album, went to London, didn't like it and came home."

So who were The Callies then Billy?

It was me and a couple of mates. We weren't even meant to be The Callies; we were going to be called The Ceilidhies, as in a ceilidh band, but nobody could spell it so we became The Callies.

What sort of stuff were you playing?

Irish songs, rebel songs. It was 1968/69 and we were doing the folk club circuit.

Were you a folkie or a rocker?

I liked folk music and I liked rock and roll. Prior to The Callies I'd been in group with my friend Ray Laidlaw and other future members of Lindisfarne. We were called The Downtown Faction. It never lasted and I picked up my acoustic guitar and hit the folk clubs.

Billy then took time out away from music and emigrated to Vancuver for  couple of years.

So how did the Jack the Lad gig come up?

When I came back to the UK in April 1973 I got a call from Lindisfarne's Ray Laidlaw asking me to be their replacement live singer as Alan Hull was going to leave the band and concentrate on writing and pursue a solo career. This never happened: Alan stayed and the other three left! So Alan kept the Lindisfarne name and I joined the others and we became Jack the Lad.

Jack the Lad went on to record four acclaimed albums on the Virgin imprint Charisma Records and toured the UK and Europe. What about America? Did they get it?

They did! But sadly we never cracked America; despite strong sales of the first album a promised tour never materialised. Another story to add to rock and roll's What If section.

Lindisfarne would subsequently get back together and Billy was happy to be recording and touring with his own band. But Billy would return to the fold when Alan Hull bowed out for the last time.

I've had some great highs in my career but the Alan Hull Tribute concert at Newcastle City Hall, home of so many Lindisfarne Christmas concerts, in 2005 was certainly up there.

They'd have been big shoes to fill.

They certainly were, but I never set out to directly mimic him in anyway. And, anyway, we'd all been friends for many years.

Billy recorded two albums with Lindisfarne - Here Comes The Neighbourhood and Promenade before they split up for the last time. Billy now tours on his own but is often joined on stage by his son Tom.

Yes, I play on my own these days or with people like Bob Fox (currently Songman in Warhorse) or Tom - we've got another generation of Mitchells coming through now.

Billy is also touring The Lindisfarne Story with Ray Laidlaw a show with words and music - well worth seeing if you get the chance.