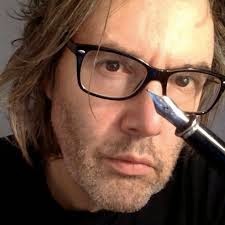 Phil Wilding is a music journalist, radio producer and presenter and most recently author of the acclaimed Cross Country Murder Song. And with his good friend Phill Jupitus he was one half of The Perfect Ten - a real time podcast they used to take out live on the road. Phil kindly agreed to answer a few questions. Sadly I didn't ask him about his fascination with fountain pens.

I hear you're a born again runner. Did I hear right?

You did, I used to run in my youth and then touring with bands and drinking in the daytime took over for a while. Then I found myself working at Men’s Running magazine for a few years (I did a column and wrote and edited for them) and being in that kind of environment pretty much ensured that you were out running along the Thames at least three times a week. I actually started enjoying it and now I do it for the solitude and to think, and to keep fit too, obviously.

You're back on the radio. Are you having fun? Do you prefer being in front of the mic as opposed to knob twiddling?

I do both, I joined Team Rock Radio to produce the Metal Hammer Magazine Show five nights a week, Alex, who presents it, used to be the occasional music contributor on the 6 Music Breakfast Show with me and Jupes, so there’s a certain symmetry to it. I literally presented the Prog Show as they needed someone to cover for a month and I’d done a lot of work on the actual magazine, so knew a lot of the music and musician involved. I was just my usual scathing self, but going into tunes by Yes as opposed to someone like the Manics. Then oddly, the bosses at the station heard it, liked it and asked me to stay. It’s just gone to two nights a week; I’m expecting to be found out anytime soon.

Now you're a published author do you swan around at literary gatherings calling everyone dahling?

Not as much as Jupitus does. No, you’ve met me, I don’t play well with others, I did a few literary and music festivals when the first book came out, and readings were fun if only to watch the way people reacted to the things I’d written (appalled, shocked, angry), but I don’t want to buy into that strange little world, though I think my agent wouldn’t mind if I did.

How's the second book coming along?

The second book is pretty much done, it just needs a final polish and then I need to be able to let it go – harder than it sounds. On the book tip, we’ve finally got the film rights for Cross Country Murder Song away, some North American producers have picked it up, more news on that if and when I get any.

You've interviewed some of the greatest bands rock and roll bands in the world. But who was the dullest? 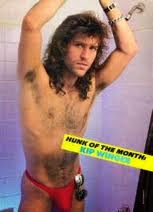 Kip Winger (of the band Winger), you probably wouldn’t remember him, but at the time his band had sold something like three million albums, and he’d become something of a pin-up, he wore torn T-shirts on stage and fingerless gloves (he sang and played bass) and was in pretty good shape. So even though his label, Atlantic, had flown me to Chicago to talk to him at some festival just north of there, he told me he could only give me ten minutes as he had to work out before he went on stage and he kept his mirrored sunglasses on the entire time. I did not make him my friend and I never did write the article either. I remember all the teenage girls screaming as he came on stage, I’m sure the memory of that kept him warm after Beavis and Butthead eviscerated one of his videos on their show and practically halted his career overnight. Strange days.

And who came closest to Spinal Tap?

Mötley Crüe were pretty close, they were living in a strange world of excess and hype and had been on tour far too long, they were always pretty kind to me, but just caught up in this weird bubble, I’m sure you’ve read The Dirt, it was just like that. I remember being on the side of the stage at one of their shows and Nikki Sixx ran into the wings, threw up into a bucket that was there for that very task – it happened more than once on their tours – gave me a big grin and a thumbs up and went straight back out before the audience even noticed he’d left. You have to sort of take your hat off to that kind of thing. The last time I saw him backstage at the Roundhouse, he was drinking green tea and was incredibly serene.

You're Welsh. Do you sing? Can you sing?

Of course I can, like all Welsh people. I also live in a big house on a hill in Camarthen with MSP and the Stereophonics and everyone in Wales was born on St. David’s Day, you berk.

Would you share your bag of boiled sweets on a long train journey?

Of course I do, I’m always first to the bar in the catering carriage too. What are you having?

Last Saturday it was Marah’s Kids In Philly, it makes me want to put junk in my hair and sit at a bar and do shots, preferably in New York. Though my neighbourhood is very far from NYC both mentally and physically, sadly.

Who was the last band you saw and did they give value for money?

I’m very lucky in that I don’t have to pay to go to most gigs – though I did pay for my Kate Bush tickets – but the last band I saw was Red Fang at the Electric Ballroom in Camden and they were worth the price of admission, I’m sure. It’s the Manics next and even though they’re mates they’re always great value live, I think they still mean it, so many bands don’t.

Got any advice for Mick Jagger?

Any plans to do another Perfect 10?

Yes, we always have plans to do another 10, there’ll be no more live ones, but there will be more 10s at some point, probably in the field somewhere, as it were, but we’ll do it.

Tell us something about yourself we might not know.

Geddy Lee is my homey. Though I think quite a lot of people might know that, and I have the last paragraph of the Great Gatsby tattooed on my person.