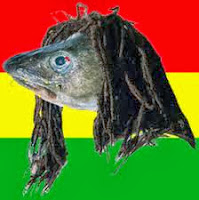 Cod Reggae: the clue's in the name. If there was an FM station that, heaven forfend, only played this watered down white man's reggae it would probably have the first two Police albums on a permanent loop with 10cc's Dreadlock Holiday thrown in for good measure. And maybe Nice 'n' Sleazy by The Stranglers if they were really pushing the boat out and ting.

Don't get me wrong, if it's done right it can be served up as a delicacy; but for every White Man In Hammersmith Palais there's a Reggae Like It Used To Be (Paul Nicholas really was old enough to know better). Likewise, for every Big Six (Judge Dread was actually on the Trojan label) you've got The Tide Is High - Blondie stylee. Or even worse, Seaside Woman by Linda McCartney; that's right, her take on reggae was about as authentic as her sausages. And before the hate mail comes in, I will gladly put forward Macca's C Moon and praise it to the hilt. Skanking.

Mettlers usually stay well clear of this sort of thing. But Girl were different. That's why I always had a soft spot for them - especially this pleasant little ditty lifted from their 1980 debut album, Sheer Greed: my Cod Reggae guilty pleasure.