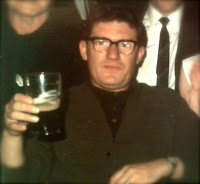 Got a birthday in December? I'll drink to that!

My dad has got a birthday coming up in the next few days with mine following on a few days later. And his dad, my Pop, would have celebrated his birthday the day after mine. All these family birthdays dotted around Christmas have invariably meant that unlike a regular birthday falling in, say, July, these dates don't have their own identity; they just become part of the C word. You try arranging something in December between the 21st. and the 31st. and see how far you get; pound to a penny it'll be a 'no can do, we've got Christmas and/or New Year parties to go to.' The subtext being 'why can't you have a normal birthday like everybody else?'

So for that reason I'm getting in early, before the onslaught of fake bonhomie, mince pies and Cliff bloody Richard, and taking this timely opportunity of wishing the Old Man 'Many Happy Returns'. I'm sure he won't mind me telling you that he'll be 78; a very sprightly 78 - he still manages to pull in a round of golf three times a week. And, anyway, it gives me chance to publish the photograph above (taken circa 1965) that I only saw for the first time at our, now legendary, family summit a few weeks ago.