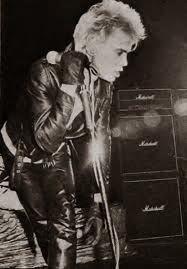 This is my diary entry for Saturday 2 December 1978.

"Riggsby's birthday today. Not just any old birthday. He's 18! We've got tickets to see Generation X - they're playing West Runton Pavilion tonight. My day started at 7 o'clock with thumb out waiting for a lift to North Walsham (where Riggsby now lives). Only had to wait by the side of the A52 for twenty minutes. Sat up in cab with mostly brilliant, but ever so slightly right wing, lorry driver who was quizzing me about why I would want to go and see a bunch of pooftahs perform in a dancehall a million miles from anywhere. I just kept telling him to listen to their first album and he'd work it out for himself. He bought me breakfast in a greasy spoon where the ten second rule was invented. Stroke of luck he was dropping his load off at Smedley's so was able to throw me out right outside Riggsby's mum and dad's house. Mrs. Rigg is a top mum. She talks to me and Riggsby about stuff my mum has no concept of: Susan Rigg has heard of punk. And the new wave. My mum is still getting over the loss of Glenn Miller. Before the gig she makes us all dinner (that's tea, really) and we all sit round the kitchen table and talk about current affairs, Tommy Cooper and the new ring road in Kings Lynn. We all drink wine. And then we talk about Billy Idol and all the brilliant songs he's written. We go to Riggsby's bedroom to listen to Ready Steady Go one last time before Mr. Rigg drives us to the venue in his beat up old Land Rover. Arrive at West Runton Pavilion and we can hear the band sound-checking but all the doors are locked and there's not a soul in sight. We disappear to The Beehive and blag ourselves a pint of cider each which tops up the wine from dinner nicely. Back to the venue where they open the doors and we race to take up residency at the front of the stage. Generation X come on at half nine - the crowd are going barmy and the pint pots are flying. Billy Idol sneers throughout. We keep shouting to Tony James to play Wild Youth but he tells us repeatedly they don't play that anymore. But they do play Your Generation, Kiss Me Deadly and a clutch of new songs including a real tub thumper called Night of the Cadillacs. And, of course, Ready Steady Go. Riggsby's dad picks us up at eleven - in the car park with steam rising off us we look like a pair of racehorses after a hard race. Gig score: 10/10."

Where are they now?