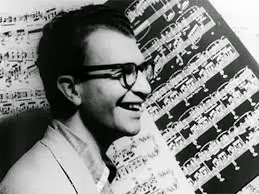 Take Five, the jazz standard everyone associates with Dave Brubeck, was actually written by his sax player Paul Desmond. It's been appearing on TV soundtracks and movie scores as well in clubs around the world ever since it was first released in 1959. However, written in quintuple (5/4) time (like Lalo Schifrin's Mission Impossible theme) it's virtually impossible to dance to.

After leaving the Dave Brubeck Quartet Desmond would go on to play and record with some of the biggest names in jazz including Gerry Mulligan, Chet Baker, Jim Hall and The Modern Jazz Quartet. But he and Brubeck did get back together again in 1976 for a handful of sell-out reunion gigs and and a live album. In fact the last gig he played was with Brubeck in February 1977, only weeks before the fifty two year old sax man succumbed to lung cancer; three packs of Pall Mall unfiltered cigarettes a day finally taking their toll.

In 1973 Desmond wrote and recorded a pastiche of his own remarkable signature tune - Take Ten - from his Skylark album featuring Bob James on piano.