He's not the Messiah 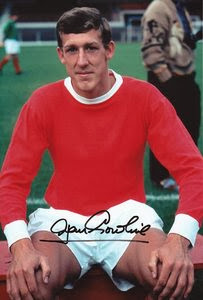 Not the best place to sign your autograph Alan

I was a fairly typical young boy when it came to outdoor pursuits: my three favourite sports were football, football, football. Living in Hull I was taken to Boothferry Park by my dad, but between the ages of ten and thirteen I flirted with Manchester United (don't worry, it soon passed). We're talking early 1970s: the Best, Law and Charlton years; not their most successful period by any stretch of the imagination, but a time when they would strut onto the pitch at 3 o'clock on a Saturday afternoon with their swanky new v-neck collared shirts - thus making Football Focus and Match of the Day unmissable on our recently acquired colour television from Radio Rentals.

Yesterday I was speaking to someone who lived in Manchester from 1969 to 1973 - directly overlapping my brief dalliance with United. His surname is Busby; he said that in that time there were only three Busbys in the Manchester phone book. And (Sir) Matt wasn't one of them; so on a Saturday evening if the team had lost his phone would often be ringing with some heckler on the other end venting his spleen. If at the time I'd had a direct line to the top I'd have been asking Sir Matt why he put Alan Gowling in his starting eleven. Alan Gowling, for me, stood for everything Manchester Utd weren't: he was gangly, ungainly, and if he had a Top Trump card his swagger rating would be 0 %. I hated him. He'd got a Degree and his middle name was Edwin. Looking back I was probably a little harsh on Gowling. He couldn't help being the way he was. Also, the stats would indicate that he did at least know where the back of the net was - something I conveniently airbrushed out of my memory at the time. So, anyway, if on the off chance you're reading this Alan, no hard feelings?