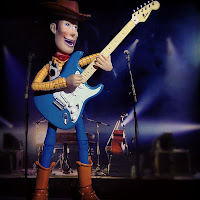 June 1 is always something of a red letter day for Ronnie Wood: not only is it his birthday (he's 66 today) but it also marks the anniversary of his first gig with with the Stones. In 1975, still in The Faces, he joined Mick and Keith on their summer jaunt across America. They warmed up with their new boy in Baton Rouge pulling in a seven night residency at New York's Madison Square Garden along the way and wound the whole thing up in Buffalo on August 8.

But it would be another four months 'til the band formally announced that they'd got their man. And thirty eight years later he's still seen as the new boy. Many happy returns of the day Ronnie!

Here's some recent footage of him jamming at the 100 Club with his predecessor.