Beating up the wrong guy 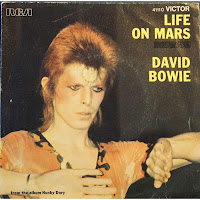 Despite its inclusion on his seismic Hunky Dory two years earlier, David Bowie's Life on Mars was released as a single 40 years ago this month on RCA Victor.

It would have set you back the princely sum of 40p if you'd bought it from your local record emporium; however, the chances are that the version most of us owned at that time wasn't even sung by The Dame. No, I've got a sneaking feeling your mum, whilst shopping in Woolies, would probably have snaffled the Top of the Pops version on the budget Hallmark label (think Poundshop meets Stiff) by some chancer called Tony Rivers. As a dreaded soundalike we'd have denied it thrice before the cock crowed, of course, but deep down we knew the boy Rivers had made a decent fist of it; he'd even got the ringing 'phone at the end.